After being a little excited to do something, I have received no word about the Jam. Just as well, not feeling to great today. Come back on Monday where I will continue my discussion on my Trans Horror game, this time looking at monsters or villains.

No I am not a Muscian, I will be Game Jammin. A Game Jam for those who don’t know is where game developers, both big and small, ranging from art to programming, get together to make games under a common theme. This one day Jam is the Love Jam. It is a response to Gamer Gate to basically bring back some inclusion and love into the games world after the general shittyness of it.

My Trans Horror game will not be what I run with, as the focus is on love and inclusiveness. However I will try to create a game centred on Trans people, probably with bright colours and rainbows and plenty of that really overdone butterfly symbolism. Ok, maybe that over the top, but I’ll try to explore the positive sides of coming out and things. My blog will also showupdates as I do things, and likely I’ll plant some images of what I do here too. It starts tomorrow, so stay tuned!

So after the sudden jump in readers when I posted my ideas for a Trans Horror game last week (readership was up 1000%! (yeah but 10 times 1 is 10) shut up!) I have decided to carry on with it for a while, see if it gets any traction. If it does, I may start a Kickstarter or other crowd funding enterprise to get it off the ground.

So toady I will look at locales for a Trans Horror game. The best Horrors use locales which tie in thematically to the central themes and ideas, or play on peoples fears. They can also play on a cultures own fears to great effect, British Horrors tend to be based in Cities thanks to characters like Jack the Ripper who made Cities dangerous places. Americans on the other hand tend to set their Horrors away from Cities, thanks to the difficulties of small towns as they spread West. So lets look at some places to set a Trans Horror game.

You might question this a little, but bear with me. Cities a full of people running around shopping, working and socialising. But what if it was empty? Trans people often feel alone in the world, although this is becoming less prevalent thanks to the internet. It is still a very common feeling feeling when first coming out to yourself, that you are the only one. So by having a City which our mind tells us should be full of people empty you can draw on this loneliness. Also, Cities are always safe for Trans people, public stabbings can and do happen, regardless of whether people are watching. Slurs can be hurled at you from all directions from a faceless mob. Which brings me onto another City design, one full of people, but people you cannot see clearly. All you can see is their staring eyes which burrow deep into your soul because you dare to be different.

Or an Asylum to most folks. This works really well not only because they are already creepy places, especially Victorian ones, but they play on the common misconception of Trans People. If you don’t know what that is its that we are all insane lunatics who need locked up. Ok, some are decent enough just to think its a mental illness and we need counselling, but the idea is the same. Given the often clinical nature we are examined by others, especially the media (the ever hated “So have you had your penis cut off yet?”) being somewhere actually medical can tie into this idea. Literally the player could be being inspected and scrutinised for their appearance and genitalia.

This obviously has connotations of death and religion. Death clearly wraps into the violence suffered by Trans people. It also brings to mind Trans peoples own suicidal thoughts and tendencies, as almost one in two attempt suicide (myself included). A world surrounded by those lost and bearing this them would be incredibly heavy and dark, so I think caution would have to be taken, however a Graveyard offers other tie ins. The religious aspects such as cross shaped tombstones, a church and even an overbearing priest can all be used to bring to mind the fact that the religious right wing tries to prevent Trans people being themselves. It would sort out a villain and a world all at once.

These where just some quick looks at different worlds and how they could help to bring forward some themes surround Trans issues. This list is not exhaustive, and was kinda quickly written. I am open to more ideas and will look into this a little more myself as time goes on. Perhaps this game will see the light of day in the future.

So maybe this is because it was it was Halloween on Friday, or perhaps because I have thought about this before, but I have come to the conclusion a Trans Horror game would be distressing as all hell. And really, you want a Horror game to leave a lasting impression on the player.

Now first off, no I do not mean a game were the villain, monster or ghost is Trans. Too often when Trans people are represented in horrors or thrillers they are killers. Just look at Silence of the Lambs or Psycho. In both cases the killer assumes a female identity, supposedly due to mental anguish or some such. Often defended as simply “Men who wish to be woman,” which is a commen trope about Trans Woman, they only help to drive the stigmaof Trans people as “mentally ill.” In games, I think the closest I have seen is Yutaji the Flesh Mage from Draken: The Ancients Gates. He is supposed to be completely mad although he does not don a female identity, merely wears woman’s skin. 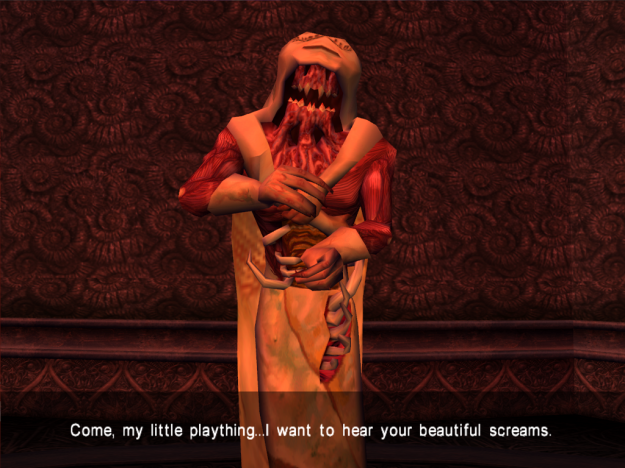 This guy was terrifying. The game wasn’t even supposed to be scary!

No, what I am talking about is a horror game which bases the world, challenges of that world and its major themes on issues facing Trans people. With that goal in mind I have thought of some issues and how they could be explored in a horror game context. Warning, things are about to get personal and maybe a little emotional.

Probably one issue common to all Trans people is control. Society tries to force us to behave like the gender we were assigned at birth, or when they do accept us force us to act in a stereotypical manner for our Gender Identity. Even Trans people try to control other Trans people, by telling them they are not truly Trans or their identity unless they have SRS. So how do we explore this in a game? Games have the unique opportunity to be Active Experiences, giving the player control over what they see, so we must break this! Some games already toy with this a little. In Wolfenstein: The New Order, a brilliant moment early in the game has you at the Mercy of a Nazi official. You have no idea what she will do, you can only pick pictures. And honestly, it is one of the scariest segments of the game. But obviously a game where the player has no control is just one long cutscene, so how do we give the illusion of control, while taking it away? Some ideas I have include giving the player a map which depicts a large open world, yet they are confined to a narrow path. Doors are locked, walls crumble to prevent passage, and horrors stop you from exploring that cool looking tower. A eerie idea I like is the idea of a stair way. When you step on it and travel up, it goes on as long as you move up, but when you turn around, you are still standing at the bottom.

Another one common to all Trans people, as our families and friends abandon our new found selves. A little more difficult to convey in a game, but it could still be done. Characters, people just out of reach, behind locked doors, walking away constantly. A simple method, and I certainly think I need to think more on this one.

Sad to say, but Trans people, especially those of darker skin (gah I hate using that phrase, can anyone think of a better one?) are at an extremely high risk of violence. I am thankful I have gone a year nearly full time and only been called “Ugly.” (by a man whose face was falling off, ooh burn) But how do you show violence in a game? Oh wait, that’s what games have been doing for some time. The difference here is of course the player will not be the one dishing it out, but receiving it, and being helpless to stop save to run away (when Trans people defend themselves, they are often arrested, because sometimes the only to stop someone killing you is to kill them). This would result likely in some kind of muscular monster, that stalks you, and you only choice if you bump into him (yes him, as its usually men who attack us, although woman do too, especially TERFs) is to run. Other possible options include the very world trying to attack the player, so they must be on a constant look out. Even then, they may not see it until its too late.

Now we get to really shit stuff. Just like violence, Trans people suffer rape to a high degree too. Sometimes it is “corrective” to show them they are wrong. Really, as I have only had to deal with sexual harassment, not sure I would feel comfortable tacking rape without doing lots more research and speaking to those who have suffered it so as to do it properly. Still I think the comic by Erin Lindsey, Venus Envy has had a very interesting way of depicting the horror of it.

The first time we see any hint of sexual assault, and its terrifying. It comes out of no where. Read the whole comic, its very good.

So most people don’t understand Trans people, as is easily evidenced by looking at media portrayals of us. Ironically, bringing in the stupid stereotyped idea of a Trans person could help here. A mirror held up to the player, telling them this is what they look like, when we can see they do not. It helps to perhaps show anyone who is Cis the horribleness of being told you are something you are not. How to make it scary and gamy though? Potentially a room full of these mirrors, which the player must destroy, potentially while avoiding the ire of that muscle bound monster.

So there we go, this was just a wee look at some issues facing Trans people, and how to gamify them in a horror context. This is in no way a complete list, and I am not really a horror enthusiast, more a casual admirer (I am scared of butterflies, how well do you think I do in horror games?). Also, being Trans isn’t all oppression and violence. There are a lot of awesome bits to it to, like being yourself, and speaking honestly, getting the right bra to turn your pecs into boobs rocks!